Written by Harry Lewis
Updated over a week ago

Generic Writeback is a licensed feature available in Velixo Reports for those clients needing to send Excel for Windows data to pre-defined screens within their ERP.

Generic Writeback can work with any active Import Scenario that is already defined within the ERP and to which the user has access rights.

Choosing the Generic option (from the New Sheet selector) starts the process of being able to create a new worksheet to write data to your ERP system. 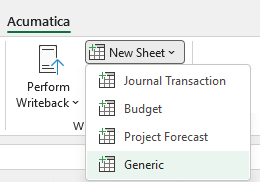 Velixo Reports will prompt you to select the Connection to which data will be sent and which of your EPR's active, pre-defined Import Scenarios you want to use for writing the data:

The Generic Writeback feature requires that the Import Scenario you want to use is already active within your ERP and that you have access to that Import Scenario.

Here you can see the Import Scenarios defined in a sample Acumatica: 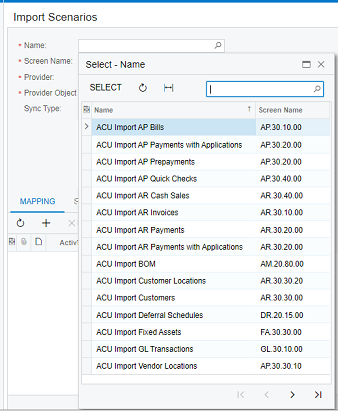 [ Note that the first step that must take place is for all active Import Scenarios to be retrieved from the ERP. This may take a moment. ]

Once that is complete, you can select the active Import Scenario you want to use: 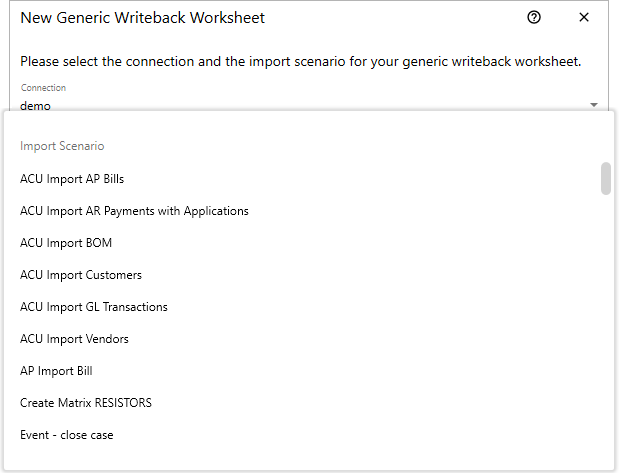 Velixo Reports will then create a new worksheet using the writeback fields associated with the Import Scenario you selected:

The worksheet includes the Writeback Status column which contains the WRITEBACK functions that will be used to send your data to the ERP:

You can now fill in the required data.

Once that is done, select Current Worksheet from the Perform Writeback selector to activate the WRITEBACK functions and write all the specified data to your ERP: 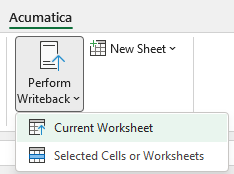 Writing Back with Attachments

For example, let's consider that we are performing a Writeback to the Acumatica Bills and Adjustments page (screen AP301000) using an Import Scenario named Velixo Import Bill.

That Import Scenario is configured to provide the ability to attach a document: 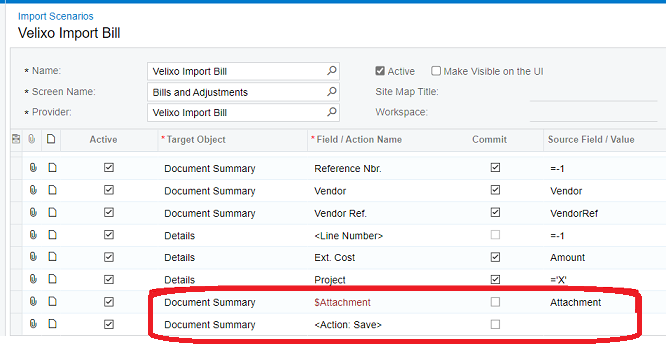 Here is a simple Writeback worksheet with the information we want to send to Acumatica, and the WRITEBACK function to accomplish that:

We will be sending data for the Vendor, Vendor Reference, and Amount fields, and attaching a file to the record.

Once the Writeback is performed, all the data - including the attachment file - is present in the Bills and Adjustments page: