Written by Gabriel Michaud
Updated over a week ago

This feature requires Velixo v6.1.2 or higher with Excel for Windows

The WRITEBACK function sends one or more lines of values to the ERP.

The function uses the fields specified in a pre-defined Import Scenario for a specific screen in the ERP.

We could create this function: 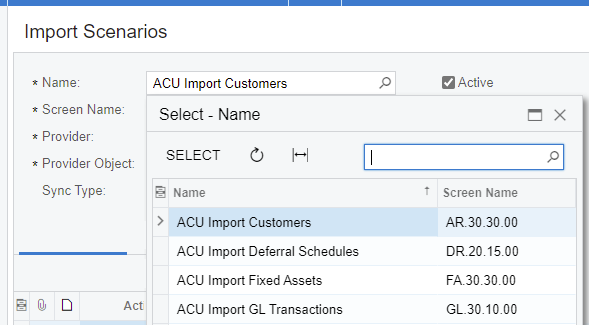 ... can then reference the data we have filled in.

The WRITEBACK function also supports importing multiple entries with a single function call. Expanding on the above example, we could send two records to the ERP like this:

🔍 See below for additional ways to compose writeback data.

Before the data is sent to the ERP... 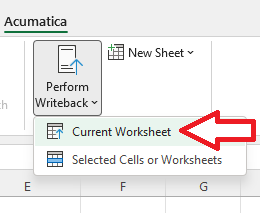 ...the status of the function is Pending:

Once we select Import Current Worksheet, the process will start:

Once the process is complete...

... the status of the WRITEBACK function will change to Line range uploaded... 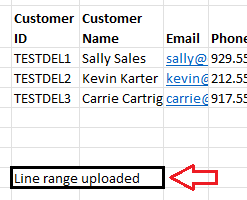 In this section, let's explore all the different ways how you can compose data for the WRITEBACK function. For your convenience, we made the function very powerful and flexible in that regard.

We will be using a hypothetical example where you write back data lines containing an account number, employee ID, a monetary amount, and a date. We'll be using a fictional screen id EX123456 and scenario names "EX Import Lines". 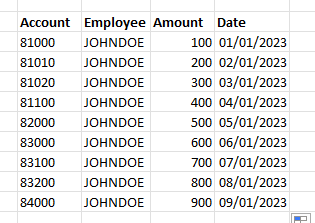 The first way to write back such a block of data would be to just specify every data line as separate RangeOrDataItem arguments of the WRITEBACK function:

This works great if the number of lines doesn't change over time, or changes relatively infrequently.

The downside is that you need to keep track when the number of lines changes, and not forget to copy down the formula every now and then.

A slight variation of the above approach is if you want to use just one WRITEBACK function and display the status just once on your worksheet. To specify data items as separate lines in such a case, you can use multiple RangeOrDataItem arguments representing writeback lines:

The downside here, again, is when the number of items changes over time, you will need to manually modify your formula.

As a block of data - single WRITEBACK function

Alternatively, you can just put the whole Excel range into the first RangeOrDataItem argument of the WRITEBACK function:

❗With hard-coded range references, it might be an OK choice when the shape of data and the number of lines stays the same over time. If the shape of data changes, however, there is a risk that you might forget to modify the formula to include the additional data lines.

It is a great choice, though, when the whole block of data is a spilling range:

👋 Hint: You can use such functions as COLLATE, HSTACK and VSTACK to compose such a dynamic block.

Let's suppose that the employee's name in our example stays the same, no matter what, and the date is the same for every line.

Also, let's suppose that the Account and Amount are Excel spill ranges coming from two different functions or data sources.

Can we compose our writeback data in a more dynamic way without using HSTACK / COLLATE, and also avoid repeating JOHNDOE over every line?

Note how we reference the Account / Amount using the spilling range syntax with "#", and also specify "EmployeeName" and "Date" as a single-cell-reference.

Velixo will be smart enough to internally compose data lines that look like this, where constant single-cell references are internally "copied down" for every row (in bold below):

This saves space on the worksheet, gets rid of unnecessary duplication, and is also completely robust if the spilling ranges of accounts/amounts resize in the future.

❗ Note, how in that last example, we still need to specify all relevant data column names in the WRITEBACK function call.